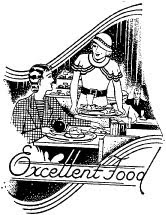 I've got some really good food for you here. This is my list of the BEST food in Salt Lake.

To start with I'd have to give a nod to the Diners Drive-ins and Dives picks for Salt Lake City. This is definitely the all time best stuff around and for good prices too. I am a DDD groupie, trying to catch as many as we can anytime we go to genealogy conferences. I can completely recommend the following.
Then a little further from downtown:
And thanks to this blog post, I've just found that there is a new one for Salt Lake that I need to go try. Lonestar Taqueria. I'm sure it will be another absolutely divine discovery. Again, a little further out at 2265 Fort Union Blvd.

And then I would recommend to you the Salt Lake Magazine's Dining Awards Hall of Fame list.
Again Red Iguana is there for the best Mexican. And there is also Takashi for best Japanese, Cucina Toscana (just south of the Salt Palace) for Best Italian, and Mazza for Best Mediterranean. Metropolitan and Bambara are also Salt Lake Magazine cosmopolitan restaurant favorites having won best chef several times and only a couple of blocks from the conference. They are all downtown except for Log Haven (best ambience--it has always been my favorite romantic restaurant) which is at 6451 East Milcreek Canyon Road.

And then Dining in Utah has several great suggestions including two barbeque places I want to try. Q 4 U has just moved out to 3951 West and 5400 South --a bit of a drive from downtown--but they say that citysearch.com voted them in the top 10 barbeque places in the US. And Sugarhouse Barbeque's site boasts the that it has been named the best barbeque place in Utah 10 years running. At 2207 South 700 East, it's not quite as far of a drive.

Now you have to stay for three weeks to try them all out ;-) But think of all the family history you'll accomplish while you are gaining all that weight. Trust me. With these restaurants it will be worth it.
Posted by Janet Hovorka at 9:00 AM