A fantastic time at Who Do You Think You Are Live

We've crossed the pond again to the world's biggest family history conference. I gave my "Grandma's Bullet Proof Vest" lecture this morning and talked to them about some of the new ideas in my book. I think it went really well. It is really a universal principle that family history is an important part of raising a well adjusted secure adult. And the adults who are teaching children all care deeply about doing everything we can to raise happy and healthy children. It is just so vitally important.

We're having a great time.

- Posted using BlogPress from my iPad
Posted by Janet Hovorka at 8:32 AM No comments: 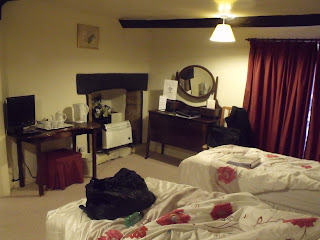 Last weekend I got to take my Father back to where his patriarchal line originated in Bradford on Tone and Taunton in Somerset England.  It was such a privilege to get to show him around and help him experience some of the lives of his ancestors.  We stayed in a Yalland's bed and breakfast farmhouse near Taunton.  The room we had actually existed at the time our ancestors were there.  I'm still having a hard time wrapping my mind around the 1600s and the 1700s. 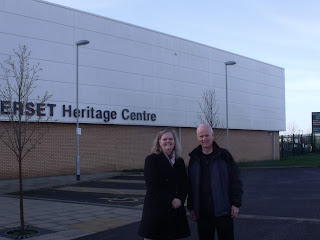 I took Dad out to my favorite place, the Somerset Heritage Centre and he agreed to be my assistant for some research there for a couple of days.  The people there were so kind and generous to us.  Phil Hawking was very attentive when we had questions and did lots of work to help us uncover more information about our ancestors.  We came home with scores of images that I now get to go through.  When Dad's grandfather first wrote the Vicar in Bradford on Tone around the turn of the century and the Vicar started sending him information about his family from the parish records there, he wrote that a "most enjoyable pastime" ensued as he tried to piece together the records of his family.  I know just how that must have felt. 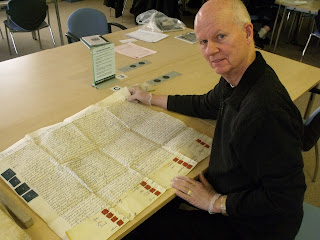 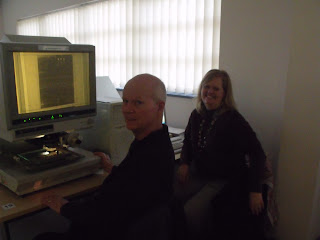 Dad came face to face with the wills and deeds I found last year of his 5th and 6th great grandparents.  It is so mind boggling to see the signatures and wax seals on these documents that you know where signed before the Declaration of Independence and Constitution of the United States were signed.  It makes everything so real.  Even that old.

Dad helped me go through the parish registers that hold the records of his patriarchal line.  We digitized several years of records off the microfilm with Dad running the microfilm reader and me running the computer.  It was nice to sit together with him and fun to hear him say, "There's a Carpenter, there's a Carpenter."  We found the marriage records and christening records for many of his ancestors and we're going to have fun going back through and documenting and piecing together the siblings and the families.  Though my university administrator Dad knows how to research, you couldn't call him a genealogist, but I think he had fun. 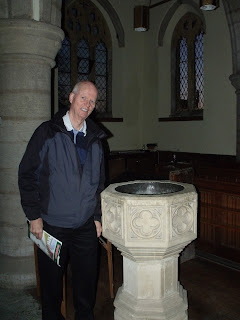 We went to the church in Bradford on Tone where all of these parish records were created.  Here he is with the christening font in the church.  I don't know how old the font is but this is the place where generations of his family were christened.  It is amazing to think this is where they went to church. 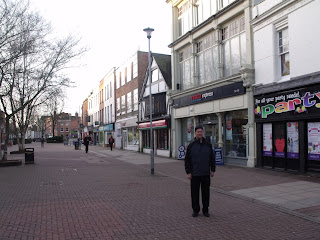 We went to High Street in Taunton where Dad's Great Grandfather was born and where his Great-Great Grandfather had a grocery store.  I haven't been able to figure out where exactly they lived but they lived somewhere on this block that is now a nice pedestrian mall.  We had a nice walk in the morning around Taunton. 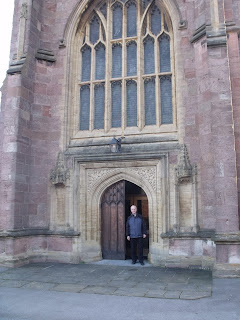 We visited the churches in Taunton where some of Dad's ancestors were married.  I lucked out this time and every church we went to was open.  It was so exciting to go in and see where these people were married and where they went to church.  We found a Congregationalist church that was built when Dad's Great Grandfather was a young child just down the street from where his family lived.  He grew up to leave the Anglican church and become a Congregationalist minister.  So I'm wondering if that new church had something to do with his going into the ministry.  More research to do.  :)  Here's Dad in front of St. James church where his fifth great grandparents were married just over 250 years ago. 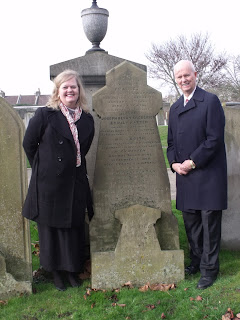 And as a final treat, after we came back into London, the next day we went out to find the plot in the Gravesend Cemetery where many members of this family came to be buried.  I hadn't scoped this site out before so when we walked in and found this fantastic tombstone it was a great surprise for me. It listed the seven family members buried there including Dad's Great-Grandparents and Great-Great Grandparents. The tombstone was in wonderful shape and had a wealth of genealogical information on it.   Such a fantastic find.

Friday evening's session will be DENISE MAY LEVENICK, "The Family Curator", speaker and author of  "How to Archive Family Keepsakes: Learn How to Preserve Family Photos, Memorabilia and Genealogy Records"  The title for her presentation is "Treasures in the Attic: Every Keepsake Has a Story."  This will begin at 7:00 pm Friday evening and is free to the public.

Saturday's program will start at 8 am with a keynote address by DAVID RENCHER, AG, CG, FIGRS, FUGA, the Chief Genealogical Officer for FamilySearch - entitled "Preserve the Pensions – The Community Makes a Difference!"
On Saturday, the fair will have classes on many different subjects relating to family history and great vendors will be showing all the newest in Family History products.
Cost for the fair is only $10.00 for UGA members and $15.00 for non-UGA attendees. The cost includes the syllabus on CD containing the handouts for all classes.  The printed syllabus will be $15.00 for UGA members and $20.00 for non-UGA attendees.  Register at the UGA website UGAgenealogy.org.

Come and join us for the 16th year of this great community event!!

If you would like to attend for free, SIGN UP AS A VOLUNTEER by contacting Kim Mason at kimberrmason@gmail.com.

We'll see you there!
Posted by Janet Hovorka at 6:00 AM No comments:

From our newsletter:
I just wanted to post a quick note to remind you that our new book is on sale only until tomorrow.  And if you pre-purchase the workbook with it, you'll save even more.

We've had such a wonderful response to the release of our first book.  Comments like "overflowing with valuable ideas and suggestions" and "must-read for everyone who treasures family history" have been really gratifying.  This is the book that will finally help you involve your family in their family history.

The introductory sale has the book at $19.95 (regular $23.95) until tomorrow.  During the sale you can also pre-purchase the workbook that goes with the book for a reduced price.  Order the Power-Up Workbook at the same $19.95 price (regular $23.95) and we'll pay the shipping when the book comes out in March.   Click here and you can save $13.00 on both books until tomorrow.  Enjoy the book now, get started with the ideas, and then when the workbook comes you'll find even more to help you connect to your family.

FREE Resources on how to teach your family members about genealogy

Have you checked out the new website yet?  Here are the FREE Resources at ZapTheGrandmaGap.com

Posted by Janet Hovorka at 6:46 AM No comments:

Email ThisBlogThis!Share to TwitterShare to FacebookShare to Pinterest
Labels: children, how to

10 Innovative Ideas To Engage Your Family With Their Family History

Posted by Janet Hovorka at 6:40 AM No comments: