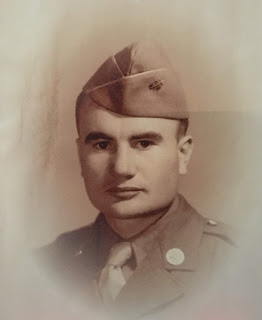 This is my paternal grandfather, Owen Wallace, he was nothing short of amazing and resilient in every way. Born the second out of seven children, he grew up working hard every day on the family farm. When WWII broke out, he was drafted into the Army. He was a part of the invasion of Normandy on Omaha Beach and earned the bronze star for his valiant service. He also received the Golden Glove award for amateur boxing in the Army.
When the war was over and he returned home, he sent word to a beautiful woman he met during his time in Europe. He married that woman, who became his first wife, his “war bride,” Berta. He had two sons with Berta and they ended up getting a divorce not many years later. He continued to farm and raise their two boys, until he met my grandmother, Angeline. Angeline already had six children of her own, but they fell in love and he ended up adopting my dad as his own son. Owen and Angeline had two more children together. A real life “Yours, Mine and Ours” story. And this man worked hard, delivering milk along his milk route, right up until he died at age 82. Everyone who knew him remarks on how hard of a worker and loving of a man he was.
I will forever be grateful that he kept a detailed journal of his life and his experiences during the war. This man epitomizes enduring hard times and coming out on top and moving forward.