What we did over summer vacation: Getting back into the groove.

We've done some fun races again this summer. Laurie and Kristy Buzbee and I have had some great fun practicing and participating in some biking and triathlon events. 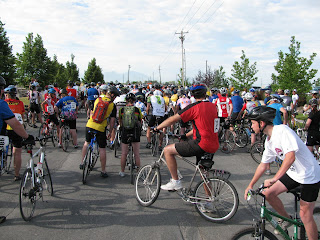 We did one, two triathlons a couple of years ago. But last year I injured my knee and got to cheer Laurie and Kristy on instead of getting involved. Having participated, watching triathlons are really fun, but it makes you anxious to get going again.

So this year I injured my shoulder and was really frustrated at the first of the year. (Yes I'm getting old and falling apart.) I'm a horrible swimmer to start with and when you add a bad shoulder, it's impossible. With other health issues compounding the problems, it was a struggle this year but I persevered. No records were set but we had a great time. And I'm ready to keep moving into a better year next year. 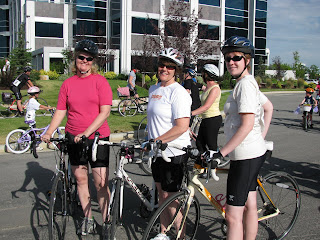 I like the low-key easy going races. In July we did the Tour de Donut. In this fun race you do three laps, and in between each lap you get to eat donuts. 3 minutes are deducted from your time for each donut eaten so the winners actually end up with negative times. I didn't have any donuts--didn't sound good to me with the biking but it makes for a really fun atmosphere. 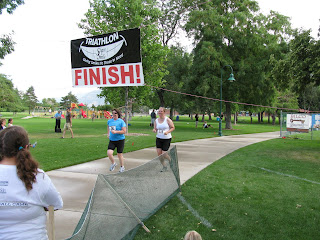 We did another biathlon in Laurie's neighborhood which went well. She lives in a beautiful area. I made the mistake of stopping to check my bike and telling Laurie I'd catch up. Won't do that again.
And last weekend we did the Share a Smile triathlon. I didn't actually do the swim, so it was a biathlon for me, but that was great because then we could do the bike and run (read: walk) together. I don't know if I'll ever try to do a triathlon in the morning and give 2 lectures at a genealogy conference in the afternoon again (Sandy Family History Expo)--my brain was pretty fried. But it felt good. And it was the best reaction ever was when Christy Fillerup asked how it had gone that morning and I moved my sweater to show her the number they had written on my arm. I said "Went well. Have the body art to prove it." And next to her, A.C. Ivory got this funny look on his face and said, "What *DID* you do this morning?" Priceless. 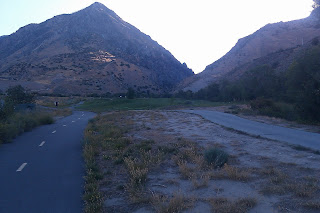 I so love biking, and Kim and I have enjoyed lots of walks together this summer. We live in a great place with lots of trails around and it gives us a good break from the computers where we can talk about plans for the company. And all summer I've been working on "Killer Hill" by my house for bike practices. I took some pictures for you this morning. "Killer hill" is just before the mouth of the canyon going up to the right in this first picture. I've seen people go up that hill 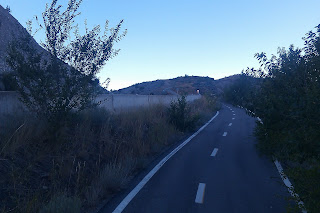 That story about Christy and A.C. at the Expo is funny. Maybe we should have an Expo fun race sometime. :)

I would definitely do the donut race. But a donut tattoo instead of a number please.