So I've been learning alot about antique genealogy practices in our extraction project. It's been quite interesting.

With cursory glances through the information that has been digitized, it looked like my great-Grandfather was keeping good track of the sources he'd used to find the information in his volumes of family group records. I've taken several friends to the Family History Library in Salt Lake to look up old family group records submitted by aunts or grandparents. And in the little box they were given to record the source of the information, there was often nothing listed, or a quick "family records" notation or something like that. My friends were left with little to nothing to go on. Glancing through Joseph's records it looked like he had real notations on each page, and I had looked forward to going through and really being able to build on his work.

But now that we are into this project, I'm finding that those notations--though blessedly consistent, are pretty brief. Often it sites parish records for the places listed in the group sheets. But as we've gone to look for those records at the library, we are finding that there may be several parishes in that vicinity and we are unsure which one Grandpa was referring to. It won't take much to figure out, but I'm realizing that perhaps Grandpa wasn't quite as meticulous as I had previously supposed.

Also, there are lots of abbreviations of place names throughout his work. I think there are two reasons for this. First, he was from England and in the British notations we are working on he didn't have to write it out, he knew where he was talking about. But three generations removed now, we don't. We'll have to go figure it out. But in Grandpa's defense, secondly, the family group sheets that were the standard back then didn't leave alot of room to be able to spell out all the details in the place names. He did what he could with the space he had.

It also looks like alot of his work was based on 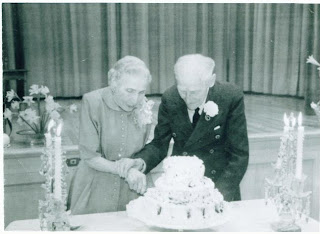 marriage records. I'm sure waiting for letters from England was tedious. It appears he went straight for the marriage records, and then estimated the births for each bride and groom and then went about piecing things together from there. There are alot of family group records with exact marriage information and estimated births.

In April 1959 Joseph wrote: "I have now reached my 98th birthday and I feel I can do little more to add to my several lines of ancestry. I can do nothing more with Rev. Grubbs, Rector of Spaxton, Somerset, who has so grossly deceived me. I leave the further solution to my descendants to attend to it when Grubbs died and a successor comes in who can more readily furnish the records of the Gibbs, Elliotts, and Carpenters of Tugswell Manor. Thus I close my research labors." However he continued working on his genealogical records until he died at the age of 103.

I wonder what Joseph thought about the generations that would come next and if they would try to build on his work. I'm sure he could never have imagined the databases, the software, and ipads, and google searches that would be available to us today. I know he did the best he could to pass things down to us in an organized way. I wonder what I should be doing to make sure that things are ready for future generations. Probably the most important thing would be to make sure that the next generation is vested in it and committed to keeping things updated and moving forward. Still working on them. Hopefully that is where we are headed.

Picture--Joseph and his second wife Lydia in 1961
Posted by Janet Hovorka at 6:00 AM