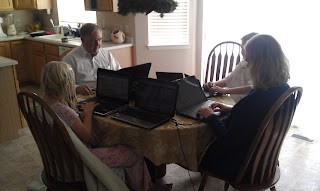 All too many laptops in this house...

So I probably made too big of a deal out of citing all the sources perfectly. I've annoyed myself now.

We're in crunch time with the present for Mom and Dad. Family ChartMaster's Christmas rush is over--you can't mail anything anymore. Since most of our charts are shipped out all over the world, we have a respite the two days before Christmas when you can't ship anything. Over the years as Christmas Rush has become busier and busier that last two days seem more and more peaceful in comparison. But not this year. I've been so busy with the company, we're in a different kind of rush now, a rush to get this indexing project done. But that's a good rush.

Making new genealogists do sources perfectly is not the smartest thing to do. You don't want to get them bogged down in the details or it isn't fun. I know better than to start the kids out with demanding perfect sourcing, but that is so important in this project so that we can build on the research my great-grandfather did. The kids haven't complained. They've been really good about it. But in this last push to finish the project--I'm the one wishing it were easier :)

About three sources for each of the events. *Tedious*. But I know it's going to pay off big when we go back to combine people and further the research. I hope the kids forgive me at that point. I just couldn't do it otherwise. Just think how wonderful it will be to have a big clean database of all this research that then we can go and verify and build on. It would be a mess to go back and have to clean up sources later. We had to start with the sources right from the beginning.

Keystrokes have saved me. That's why you can't really compare genealogy softwares and say one is better than the other. Some take alot of screens and clicks to do something and some take less. I think they're all a different number of clicks for different tasks too. If you are going to use genealogy software alot for one task, it might be useful to go through the different softwares and see how many clicks and keystrokes it takes to do what you are doing. It would be interesting to see a tally of how many clicks and keystrokes there are for the many of the tasks in each of the softwares. But even then, that wouldn't tell you which is the best for you at something else. That's why I always say that the softwares are like a pair of shoes. They each have their good points and their bad points, they each go with different clothes and fit different people. (And it helps to stay neutral when we work with each of the companies so much.)

Once again it is amazing how when I sit and do it with them they concentrate and get to work. Yesterday they had just as much to do, but even though they intended to work on it, they didn't. I'm convinced that's because I was busy finishing up genealogy charts for clients rather than sitting with them. Inspire not Require they say. It's true.

I've done enough extraction today that I've found a person who's birthday is today, and who's birthday is the same as mine. That's *alot* of extraction LOL. It feels good though. Like eating nutritiously. I'm so excited to take this data to the library and see what we can build. I think we're going to make it.
Posted by Janet Hovorka at 12:35 PM