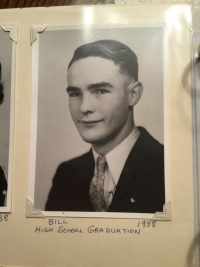 My grandfather, William James Reynolds, was born on 1 April 1919 in Sandpoint, Idaho.  As a child he contracted rheumatic fever, and it ruined his heart.  Despite this permanent health challenge, he proved to be quite resourceful in providing for his family.  Right out of high school, he started working for American Airlines.  After a time he needed heart surgery, and the airlines laid him off rather than giving him sick leave.  Obviously he needed to do something different for employment, so he bought a mattress company for $2000.  He didn't know much about the business but learned very quickly on the job.  Several years into his "career," a man approached him and asked, "Do you do upholstery too?"  My grandfather replied, "Yes"--despite knowing nothing about it.  He figured out how to do it as he went along and eventually did upholstering regularly.  He taught his wife and 3 children how to do many tasks in making mattresses and upholstering, so it was something of a family affair.  Through it all, he worked very hard and was often exhausted--but he refused to stay home.  The day came when he was too tired to go in to work, and he was never able to go back.  He died at age 47 of complications caused by a medication he had taken to strengthen his heart (Digitalis).  He was a great example of tenacity, tremendous work ethic, flexibility, and determination.

Email ThisBlogThis!Share to TwitterShare to FacebookShare to Pinterest
Labels: ResilientRoots